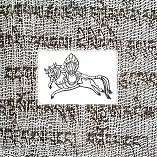 The Wind Horse is a symbol from Tibetan mythology. It carries on its back the Flaming Jewel, to spread good luck and happiness to all living creatures, except, in this instance, Keith Daly. The symbol is featured on Tibetan prayer flags; very often these are placed at strategic points on a journey, such as the top of a mountain pass, to ensure a safe passage for travellers.

With the exception of 'Pretty Girl Milking A Cow', written by Turlough O'Carolan, I composed the tunes on Wind Horse between 1991 and 1995, in what was a hectic and productive time, musically and artistically. The recordings were made by Mark Gavin Atkins in his living room, using a Fostex 4-track reel-to-reel machine, between August 1995 and April 1996. I played guitar, singing bowls and a rainstick; Adam Bowden played 5-string bass on 'The Stickleback"

Problems started when I went to get the cassettes duplicated; I chose a man called Keith Daly, of Cadence Cassettes in Southampton, to do the job. The fact that I used to see Keith Daly churning out Country'n'Western in the local pubs, wearing a stetson and one of those cowboy shirts with piping along the seams, singing in a fake Nashville accent, should've warned me. But I persisted. I was in a hurry. The long and the short of it was, Mr Daly comprehensively screwed up the job of duplication, 2 days before I was due to play a major gig, and could really have used the merchandise. He then did it twice more in his efforts to rectify the situation, and finished the hat-trick by destroying the master tape. At that point I gave up trying to communicate with him, satisfying myself with malevolent fantasies of a horrible untimely death.

For many years, all I was left with was the original reel-to-reel tapes, and unsaleable, barely-listenable cassettes, until Mark resurfaced in Australia, and did a heroic job of re-mixing the original recordings - for which I am extremely grateful. The Wind Horse CD is now for sale in my shop and available to download from Bandcamp, and you can hear a selection of the tunes on my listen page.

Here, then, are the tunes:
Pretty Girl Milking a Cow.
Like most beautiful Irish tunes by Turlough O'Carolan - who wrote about 3,500 of them in his lifetime - it has an awful name. It's even worse in Italian - 'Bella ragazza mungitura di una mucca'. Despite this apparent handicap it's still a lovely tune. My arrangement of it owes a bit to Stefan Grossman and Duck Baker. EADGBE.

Bloody Big Sunset.
Composed as the sun set over Land's End in August 1993, having drunk a heroic volume of Cornish cider. Some years later, a pompous arse, instead of saying how great I was, tried to argue there was no such thing as Cornish cider. Around the same time someone else wrote me a letter, saying how much she enjoyed the tune, but that she took the title to be descriptive of the colours of the sunset, rather than just a profanity. Sorry, sometimes a profanity is just a profanity, OK? DADGAD.

Formerly Known as 'Space'.
This started as an experiment with a multi-track tape recorder and a volume pedal; to build up a chord by playing different notes of a chord on different tracks of the tape. When I recorded this interpretation of the piece, with singing bowls and rain stick added, it has to be said I wasn't in the best frame of mind - at the time the music reflected a sense of being very lost, reaching out in the darkness for something that may not be there at all. Now, oddly enough, I find it quite a comforting and familiar piece, with none of its former implications. It's still all about reaching out for something that may not be there. EADGBE.

Ripples in a Turquoise Lake.
There's a lake in Tibet, called Yamdrok Tso. It's been turned into a Chinese hydro-electric power station. DADGAD.

Maralinga.
For aborigines displaced from their homelands so that Britain could test atomic weapons in the Australian desert in the 1950s. The area was left so contaminated that they were told they can't go back for 250,000 years, so they said "OK, we'll sit and wait"... DADGAD.

Speechless.
Sometimes, something so hideous occurs that words aren't enough. This used to be called "Logar Massacre, 13/9/82", after some particularly disgusting behaviour by Soviet troops in Logar Province of Afghanistan, during the Russian occupation. Such is the frequency of hideous outrages, though, I felt I needed to broaden the scope of the tune. DGDGBbE.

The Stickleback.
With a chord sequence in the middle that seems as old as the hills - it occurs in tunes as diverse as 'Friend of the Devil' by the Grateful Dead, the old fiddle tune 'The Blackberry Blossom', and 'The Wombling Song' by The Wombles. Which of these classics served as an inspiration here is best not asked. DGDEGD.

Moulin Town.
Reminiscent of six weeks in Scotland, a lot of alcohol, and the finest of times. With hindsight, I probably wrote this tune with the intention of pissing someone off; it worked. DADGAD.

Brickyard Creek.
Like most songs I've ever tried to write, I ran out of words after 2 verses and half the chorus. The person I was trying to address (the same one I later set out to piss off in 'Moulin Town') turned out not to be worth the effort anyway, so I turned it into an instrumental. It's for my favourite place in the world. It used to be called 'Frustrated Song' - in the sense of a frustrated attempt at songwriting, rather than a song about frustration. That was accurate in many respects at the time, but became less relevant and less interesting as the years went by. CFCGCC.

Snowfall.
This started life as a lament called 'Chushi Gangdruk' - Tibetan for 'Four Rivers, Six Ranges', the name traditionally given to the eastern Tibetan region of Kham. Chushi Gangdruk was an organisation of Tibetan resistance fighters, supported by the USA, who opposed the occupation of Tibet by the People's Republic of China, between 1958 and 1974. Now I'm not so sure; constant lamentation does get terribly exhausting. There are some beautiful harmonics at the end, which I borrowed quite shamelessly from 'Clarsach', a lovely piece on John Renbourn's 'Nine Maidens' album. DGDGBbE.